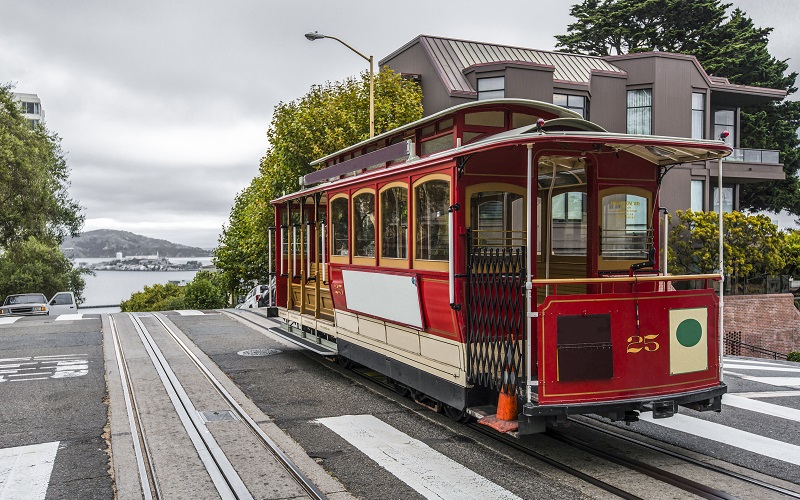 One of the most advantageous things about visiting San Francisco is that you can travel to your must visit spots fairly quickly. The city is abundant with sites to see, but it is fairly small geographically. It is only 49 square miles.

1- Walk Over the Golden Gate Bridge

Cable cars have been a mode of transportation in San Francisco since the 19th Century. Tickets for a car ride are $7 and can be purchased at the cable car turnaround, which is at the end of each route. The cable car runs through three routes by cable that is underground. A ride on the Cable Car will give you a spectacular view of San Francisco.

The rock is another name for Alcatraz, which is located on an island in the middle of San Francisco Bay.  It was home to some of the most dangerous criminals during the time of its operation. Many prisoners tried to escape the rock, but because of the icy cold water that surrounds it none were successful. Alcatraz  (“the Rock”) was closed in the 1960’s, but the stories have since become legendary. Alcatraz is not a museum where you can listen to fascinating recorded tours of life in prison there and the famous criminals who called the Rock home.

Fisherman’s Wharf is where Pier 39 is. It is a fun waterfront market. It is a very popular hot spot in San Francisco and attracts many locals and tourists. Here you will find a home of Sea Lions who live on the floats in Pier 39. There are a lot of famous sites and sweets spots not too far away from Pier 39.

If you want to do a bit of damage to your wallet, then Union Station is your stop! It is home to many major department stores and many exclusive designer boutique. The Westfield shopping center in San Francisco is home to the second largest Bloomingdale and second largest Nordstrom in the United States.

North Beach is in the city’s Italian Quarter. Even though it is called North Beach it really isn’t a beach at all. It is a neighborhood that is filled with European style sidewalk cafes, shops  and restaurants. The Church of Saints Peter and Paul is located in North Beach and is a wonderful spot to take photos of both of the San Francisco bridges and the Bay. Inside Coit tower you will find marvelous murals that display scenes of life in San Francisco in the 1930’s.

7- Walk Through the Oldest Chinatown

Enter the Dragon’s Gate to Chinatown where you will be amazed at shops and restaurants. Chinatown spans 24 blocks in San Francisco. Most of Chinatown is situated on Grant Avenue, which is the Oldest street in San Francisco. Tourists can explore shops, eat dim sum, visit the temples and even explore some museums while visiting Chinatown.

As every big city, San Francisco has some amazing restaurants. It is home to some of the best restaurants in the United States. There are an array of ethnic cuisines you can choose from — Japanese, Greek, Chinese, Italian, Moroccan, Malaysian, Mexican,  You name it San Francisco has it.

9- Ring in the San Francisco Nightlife

San Francisco night life is forever evolving. The best nightclubs are at the south of Mission District. You can find places that will play jazz, blues, rock, hip hop and latin music. You can even find joints that will play swing music.

You can’t visit San Francisco without visiting the internationally acclaimed symphony, opera or ballet company. There are many museums (San Francisco museum of Modern Art, Asian art Museum, de Young Museum, and Legion of Honor) that hold performances. San Francisco is also known for the California academy of Sciences,  which has an aquarium, planetarium and  4 foot rainforest.