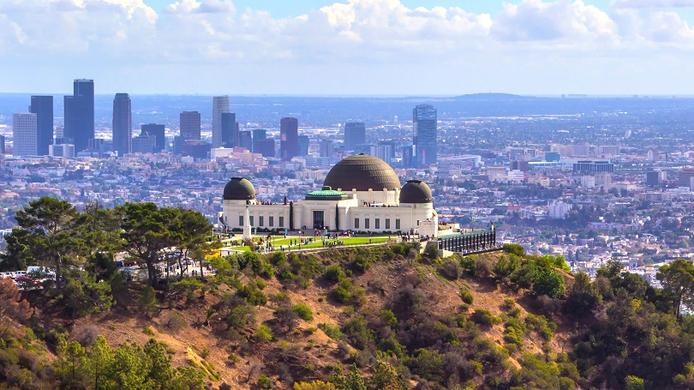 The town of Hollywood is famous around the entire world for its glamour. Some parts of Hollywood are not that special, but others are gorgeously filled with glamorous hotels and celebrity hot spots. Below is a guide to the 16 places in Hollywood that are considered a must-see.

As possibly the most famous sign on this Earth, and the appeal that’s quite synonymous with Los Angeles and the USA, The Hollywood Sign tops the list of attractions from Hollywood. Initially built to say “Hollywoodland,” it was supposed to only be up for 1.5 years. Now nearly 90 years later it is still up and a signature landmark of Los Angeles. There are plenty of places across Los Angeles where you can view the Hollywood sign and take pictures with it. Lake Hollywood Park offers great views of the sign, or have a hike up Mt. Lee Drive that can take you to the Sign!

Practically every star that is notable, celebrity, comedian and entertainer is represented on the to the iconic Hollywood Walk of Fame. Find the real history of Hollywood by browsing Hollywood Boulevard and some neighboring roads that house these stars that are the prized possession of the entertainment industry. Notable stars include Tom Cruise, Alec Baldwin, Lucille Ball, Johnny Cash, Dick Clark, Ryan Seacrest, John Wayne, Charlize Theron and countless others.

The Capitol Records building is only one of the buildings which brightens up older Hollywood whenever you visit it. Known around the entire world, this 13 level building is really a landmark of Hollywood that was constructed in 1955. Now it houses a portion of Capitol Records business’s  plus it is the home to numerous tv series and movies.

The legendary Hollywood Bowl, located north of the Hollywood and Highland shopping complex, is just one of America’s most famous outdoor concert amphitheaters. The sound really is pristine, and groups really like to play at the legendary Hollywood Bowl. On a warm summer night, there are only a few things better in Los Angeles than listening to a concert at the Hollywood Bowl. Between important concert tour events,  and other events like the L.A. Philharmonic and KCRW sponsored evenings, the Bowl can be a superb alternative for an outdoor concert. Stop by our Hollywood Bowl Guide when you are intending to fill your ears with the latest beats.

This completely remodeled and restored theater was constructed in 1926 and now shows Disney’s latest movies as well as classics. Registered from 1990 on the Los Angeles historic-cultural list, It is a real Hollywood landmark that shows a bit of modern Hollywood as well as the history of Hollywood.

Situated in the mountains over the Hollywood Reservoir (yes, there exists an entire body of water in the Hollywood Hills), Lake Hollywood Park is available to the public all year round and offers incredible views of the legendary Hollywood Sign, as well as walking trails, mountainous areas, and an excellent spot to let your pet roam.

One of Los Angeles’s most popular historic sites is the Griffith Observatory. It is a must see. Constructed on the south slope of Mount Hollywood, the structure and its surrounding grounds offer you magnificent views of Los Angeles. The Observatory has played host to many movies like James Dean’s “Rebel Without a reason”. It’s really a big tourist destination for folks from around the world, and in the building, there are displays that have telescopes for visitors to view the galaxies of the unknown. Together with its incredible Zeiss star projector, a laser electronic projection system, an amazing aluminum dome, theatrical lighting and wonderful sound, the planetarium holds lots of shows that help viewers ask important questions about the universe.

With Numerous houses in the Hollywood Hills, Why Is the Stahl House really significant? To put it simply, it’s all about this design. Designed by architect Pierre Koenig, this house is one of the places on the U.S. National Registry of Historic Places because it represents a twentieth-century contemporary structure in Los Angeles. It has also been in some iconic photos shot by Julius Shulman as well as many iconic movies.

Barnsdall Art Park is regarded as one the most incredible parks and playgrounds in Los Angeles. In Barnsdall Art Park, you’ll find a great deal of spacious green spots to bathe and run around in sunlight. You will also find the home of Frank Lloyd Wright’s Hollyhock. This house was originally a huge art building. It sill has many art exhibitions. You can also take a tour of the Hollyhock House.

The Hollywood Forever Cemetery has increased in popularity over the years. It holds many events. Cinespia outdoor movies and Dia de los Muertos events and also concerts are hold at this cemetery. You can see that this is no ordinary cemetery. Because of the types of events that are held at the cemetery. The owners have been ridiculed for holding them at the resting place. I mean it is the resting place for many of Hollywood’s elite. Because it was one of Hollywood’s first cemeteries, it is the resting place for greats like Judy Garland, charlie Chaplan Jr, Mickey Rooney, Douglas Fairbanks, Nelson Eddy, Peter Lorre, Janet Gaynor, Tyrone Power and Clifton Webb. The cemetery is supposedly haunted and is a favorite place during Halloween.

Vinyl, CD’s and other types of musical items have become extinct thanks to the new digital era. This is why the Amoeba Music in Hollywood is amazing. Other stores around the world with Vinyl, Cd’s and tapes have closed down, but Amoeba Music is still flourishing. This is home to over 250,000 new and pre-owned CDs, cassettes and Vinyl records. Amoeba Music also has a special corner that has collectible more vintage type music records, t-shirts, posters and everything music related. This L.A. landmark is a goldmine for everything music related.

Grauman’s Egyptian Theatre was built precisely by the exact same architect in charge of other legendary theater’s, for example, the Chinese Theatre and El Capitan Theatre. Entirely renovated in 1998, a multitude of pictures are taken here.

Runyon Canyon is among the most liked hiking areas for locals and tourists.  This hiking spot is about 3 miles long from beginning to end. Dogs are welcome on the road, and you also might see a star or two while hiking.  Your perspectives will not leave you wanting for more. You have a wonderful view of the Hollywood Hills and the Los Angeles Basin. Runyan Canyon is not open at the moment because of construction, but it will be open later on this summer time.

Musso & Frank Grill was around since 1919, which is four years before the iconic Hollywood sign was constructed. This restaurant has become an important part of the Hollywood elite of past and present day. This restaurant has been passed down from generation to generation. It is known for its amazing food and very classic atmosphere. This restaurant gives off an old Hollywood feel. It still has the same feel and interior atmosphere from when Charlie Chaplin used to frequent there. The menu is also a classic and has not changed much for about 100 years. In Hollywood’s earliest eatery, guests relax into crimson stalls and pick from a number of these classic dishes just like the Grenadine of Steak Filet Mignon served with Au Jus and the Chicken Pot Pie.