Things to do in San Francisco with Kids 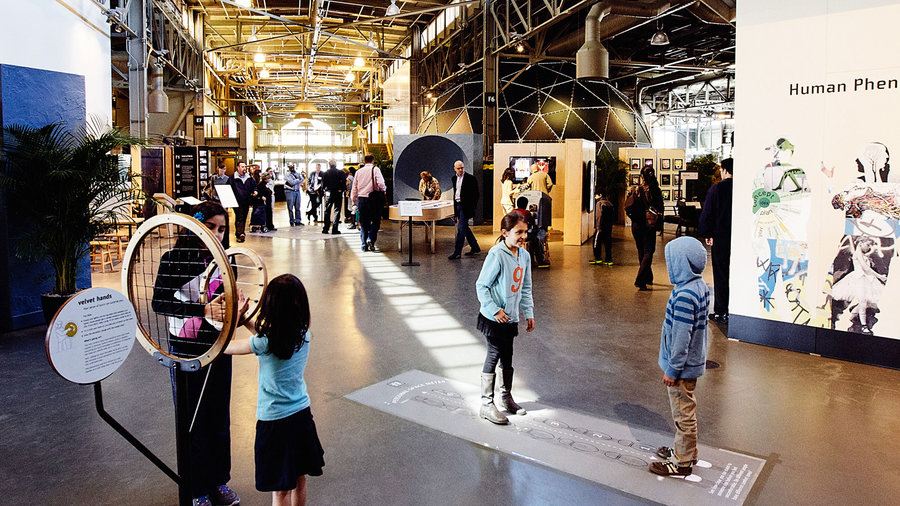 Things to do in San Francisco with Kids

Going tête-à-tête with belching sea lions, running wild in Golden Gate Park, watching butterflies fly through a living rainforest, riding cable cars, playing dodgeball on a giant trampoline—there are so many fun things to do in San Francisco, the city sometimes feels like a 49-square-mile amusement park. Luckily for parents, most of San Francisco’s kid-friendly attractions have a lot of adult appeal, too. And when it’s time to recharge, kids can pick from a multitude of restaurants that offer fresh kid-appealing items which go way beyond the standard chicken nuggets and hot dogs, including healthy picnics bought from gourmet food trucks.

Alcatraz (“The Rock”) is a wonderful place to take your children. You start the tour with a scenic ferry ride from Fisherman’s Wharf. At Alcatraz you will be able to take part in a recorded self-paced guided tour that will teach you about the maximum security prison. You will learn all about the ins and outs of the prison from its opening in 1934 and its last day in 1963. The recorded tour will teach you about the notorious prisoners who called Alcatraz home and also the prisoners who unsuccessfully tried to escape “The Rock”. The tour is narrated by former guards and prisoners.

2- Aquarium of the Bay

The Aquariaum of the Bay is a great place to take your children. You can see all the aquatic life that lives in the Ocean. The tours will take you through  tunnels through 300 feet of water and showcase over 30,000 different types of aquatic animals. There are also many hands-on tide pools where you can feel the leopard sharks and bat rays. There is also a fun otter show, which shows three very fun and playful Norther American river otters.

Cable Cars are considered a landmark in San Francisco. They travel between Powell and the end of Hyde Street at Fisherman’s Wharf. The cost of a ticket is a mere $7, but the experience is priceless. The Cable car travels at 9 mph and you can take in the sights of Fisherman’s Wharf, the Bay, Alcatraz Island and Nob Hill. You can also learn more about Cable Cars by visiting the museum that is dedicated to them located on Mason and Washington Streets.

The California Academy of Sciences is the world’s greenest museum, Inside you will find an aquarium, natural history museum, scientific research programs and a planetarium. It also has a 4 story rain forest dome, which is considered home for birds and butterflies.  Also, the roof has over 1.7 million native plant species. There is plenty for children to enjoy here from the world’s deepest living coral reef display, to a flooded forest in an acrylic tunnel, and an all digital Morrison Planetarium. The California Academy of Sciences will not disappoint.

Chrissy Fields was previously an airstrip and it is now a restored wetlands recreation area. There are places to go for long walks and just roam around on a bike. There is a sculpture park, picnic areas, a trampoline park, climbing gym and a beach. At the Chrissy Field Center you can get a history pamphlet  with clues that the kids can solve as they discover what Chrissy Field has to offer. Also, you can take the path past the Farallones Marine Sanctuary center and hold a shark tooth or feed an anemone. There is also a yummy restaurant (Warming Hut) that offers organic soups, sandwiches  and souvenirs.

The Exploratorium is an all time kid favorite in San Francisco. It is as big as three football fields. The Exploratorium is considered heaven for those who are into science and math. Here there are many hands-on exhibits that challenge the ideas of physics and human thoughts. New exhibits are constantly introduced at the Exploritorium. The popular fixed displays are of the Sweeper’s Clock, a marble maze and a parabolic mirror. Some hands-on activities include a crawl though  maze that you have to navigate in the dark using only your sense of touch.

San Francisco is home to the Golden Gate bridge, which also has the Golden Gate Park. Golden Gate Park is a wonderful place for families to gather and explore the museums, gardens and just play. On Sundays, the main drive closed to cars so that bikers, parents with strollers, and skaters can have free roaming privileges.  Kids will love going to Slow Lake. Here they can rent bikes, row boats and pedal boats. You can also visit buffalo paddock which is home to small herd of Bison since 1892. The Japanese tea garden is also located here. You can grab a cup of tea here to relax while your kids climb the moon bridge and the Koret Children’s Quarter Playground.

The Musee Mecanique is half museum and half old-fashioned arcade. This is home to over 200 coin-operated games and amusements of Ed Zelinsky’s that are from as far back ast the 1880’s. Here you will find gypsy fortune tellers, can-can girl stereoscopes, carnival strength testers, player pianos and a looming laughing sal. These games are very amusing the adults and kids alike. In the back of the museum you will find the reconstructed USS Pampanito, which is a submarine from World War II. You can take a tour in the submarine. On the walls of the museum you will find artwork of earthquakes which gives the feeling of a wild west California.

Off the Grid is a festival and eating extravaganza all rolled into one. Food trucks from all across the city get together during different days of the week to put together what is known as Off the Grid. This is a kid favorite gathering where they can try foods from all across the globe. Some featured items have been Asian BBQ, Indian comfort food, the Bacon Bacon truck featuring the bacon-friend chicken burger and chocolate tacos. This festival also has music, crafts and activities. All things kids will enjoy. The trucks regularly meet on Tuesday, Thursdays and Friday at the Civici Center, Haight street and Fort Mason.

Every child loves a good zoo. The San Francisco zoo spans 3-acres. It is filled with a gorilla preserve, lemur forest, a petting zoo, and a grizzly gulch. The zoo is home to more than 1,000 different mammals and birds. In order to make this home for the animals, the zoo has recreated environments from around the world. This includes an Australian Walkabout for the kangaroos. There is also an insect zoo where you can find hissing cockroaches. Also, take a ride on the little puffer train! I am positive that this will be a favorite spot for kids and parents.