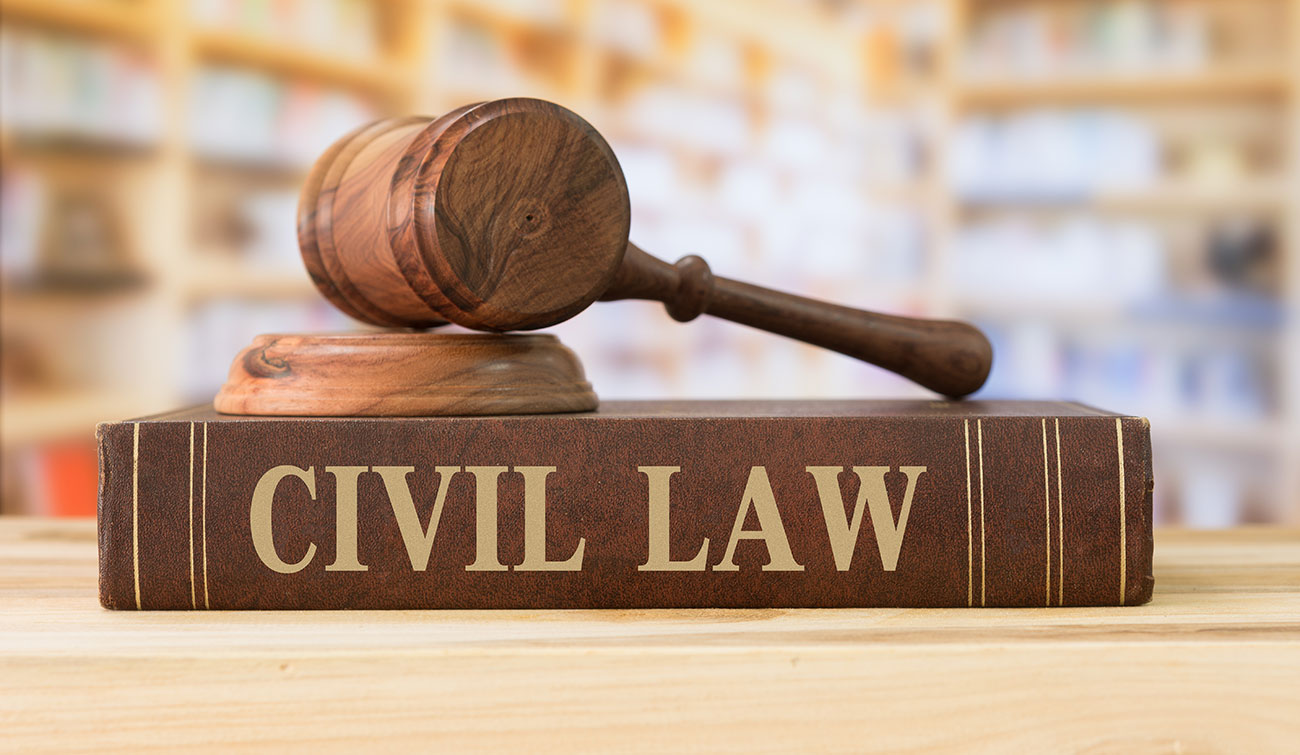 Civil law is defined as a set of rules (the law) that defines and protects the private rights of citizens.  Civil law offers legal remedies that can be sought in a dispute, and encompasses areas of law such as contracts, torts, property and family law. Civil law is originated from the laws of ancient Rome which used doctrines to develop a code that determined how legal questions would be decided.

Civil Law evolved from Emperor Justinian I rule of ancient Rome. One of his long lasting and prominent legacies is his rewriting of the Roman law in “Corpus Juris Civilis,”. This book still serves as a basis for modern civil law systems worldwide.

Civil law cases are generally divided into four main categories, each with it’s own unique range of issues.

Contract law deals with arrangements between two or more parties, each of which will be bound to maintain their section of the agreement. By way of instance, two parties enter into an agreement for the rental of an apartment. The Lessor has the right to use the apartment, and the landlord receives lease money as compensation. If one party violates any of the terms and conditions of the contract, they’ve committed a civil wrong called “breach of contract.” Broadly, contracts may be oral or written, however there are certain kinds of contracts that have to be placed in writing.

Tort law is a branch of civil law that is concerned with personal injury and civil wrongdoing. A tort is a civil wrong, done by a single individual or thing to another which leads to harm or property damage, and often involves monetary compensation to the injured party. There are 3 types of torts: negligence, intentional tort, and strict liability.

Negligence is an unintentional tort, to which there Are four elements that have to be satisfied.

An intentional tort is a deliberate wrongdoing where the defendant acted With intent to cause injury or harm. A few examples of intentional torts include: assault and battery, false imprisonment, fraud, invasion of privacy, and intentional infliction of psychological distress.

Strict liability is a tort that does not require real negligence or intent to injure. It’s based on a complete or”strict” obligation to guarantee something is safe. Strict liability often comes into play hazardous activities, such as bungee jumping. The company that owns the bungee cords, or provides the activity to customers, has an absolute obligation to make certain that the bungee cords are intact, hooked up properly, and are prepared to operate safely. If a consumer is injured since the cable breaks or comes undone, the provider is responsible for the injury under strict liability.

For example, a woman sees her neighbor planting Flowers in her backyard, and notices she’s five additional containers of flowers without a place to plant them. The lady decides she’d like flowers in her backyard also, and takes the leftover containers of flowers without asking for permission from your neighbor. The woman deprived the neighbor of her flowers, planting them rather in her own garden. The lady has dedicated conversion.

Family law is the branch of civil law that deals with marriage, Divorce, annulment, child custody, adoption, birth, kid Support, and some other issues affecting families. This branch of Civil law is unique because there isn’t necessarily a man who committed a civil wrong. This is especially true in countries that have no-fault divorces. The family court gets involved in dividing Property and finances following a divorce, establishing child custody, child support, and spousal support among other things. Some newer Areas that fall under the family law umbrella are same-sex union, artificial conception, surrogate motherhood, in-vitro fertilization, and palimony.